Thought for the day? “It’s bad luck to be superstitious-“

Weather News: Boston got as much as 37 inches of new snow on Monday, and already had two feet of snow on the ground. Public Transportation came to a grinding halt there.  & It looked like Halifax and other parts of Nova Scotia were getting dumped on Tuesday. Newfoundland and Labrador are being clobbered on Thursday. With two possible Nor’Easters heading for Maritimes over the weekend. On Friday they’re telling us we’ll probably get off easy while a storm might hit Nova Scotia, But Sunday might be another ‘Major’ snow event.

{ Today’s Birthdays : — You can find all this and more at http://www.historyorb.com/today/birthdays.php

Yesterday’s News: Smart TVs that can recognize verbal commands can listen in to any conversation inside your home while that feature is on. NSA operatives etc, can also turn that on whenever they feel like it. Samsung admitted they have ‘a third party’ monitoring everything “to know when a command is given.”

Mass shooting spree suicide plot foiled by Halifax police   { * Be suspicious of this kind of headline. It might be true, but look deeper. We keep hearing that too many of these loose cannons were normal people who were ‘targeted and conditioned, then activated’ to carry out their crimes. Texas Tower shooter, Unibomber, the guy who shot John Lennon, and almost anyone, especially ‘lone gunmen’ who ‘flip out’ and shoot up schools, movie theaters, etc. They may not all be MK-Ultra but if some of them are, we have to do something about this. *  —djo— }

Why are so many of Peter MacKay’s appointed judges also his friends   {* Looks like another scandal is about to rock the Harper ‘government’. Peter MacKay has been in the spotlight before for inappropriate behaviour. He comes off as a mean spirited- bad loser. * —djo— }

FBI agent arranced ‘chance’ meeting with Via Rail terror suspect   { * Stephen Harper is a micro-managing ice-hole. If the Canadian people re-elect him prime minister, then (1) they deserve to go to hell in a handbasket and (2) I wouldn’t believe a ‘fair election’ or honest vote count happened anywhere on this planet, ever. * —djo— }

Stephen Harper’s chief spokesman leaving PMO ahead of election   { * I should quote a woman friend who lives in Canada, “More rats are jumping ship before it goes down and brings them with it”.  *  —djo— }

Did you leave thousands of dollars in a bundle of drapes?   {  }

Petri Island ice fishing village invites gamers with arcade   { * I had to read this one a couple times before I understood what it meant. * —djo— }

Local producers praise David Coon’s food security bill   { * – Some New Brunswick entrepreneurs say Green Party Leader David Coon’s proposed Local Food Security Act will help grow a larger market for locally grown food in the province. – The proposed bill would see the provincial government give preference to local food providers to supply food for nursing homes, schools and hospitals. – It would also include better labelling for local food and bringing healthy food education to schools. – Tim Cochran of Cochran’s Country Market said he has seen firsthand the state of New Brunswick agriculture industry. – “We have a lot of farmers that I’ve been dealing with for 20 years that they’re going to retire and there isn’t the farmers there to take their place, partly because I think it’s a hard industry to break into,” Cochrane said. 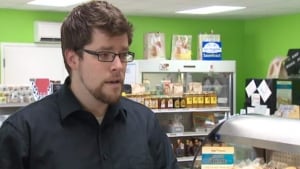 Levi Lawrence, the owner of Real Food Connections, said Coon’s bill would help create a better market for local food in New Brunswick. But he said change will not happen immediately. (CBC)

– Cochran said Coon’s proposal could help make it easier for people to make a living in the agriculture industry. – “I think it’s excellent,” he said. – “From what I understand, it’s really going to promote and drive the promotion of locally grown produce and products.” – Levi Lawrence, the owner of Real Food Connections, said the act would be a step forward by building the market for local food in the province. – But he said even if the bill passes, change won’t happen overnight. – “There is still a lot of work to be done in the province in supplying, distributing and processing what we grow in the province that the act doesn’t really help us do,” Lawrence said. – “It does create a market for entrepreneurs to work on that problem and better reason to get into that business, but that’s the biggest gap we have in the province today.” – Lawrence has been expanding his local food store in Fredericton and is now getting ready to open up a store in Saint John. He went through a major crowdfunding campaign last year. –Coon open to amendments – The bill is expected to have its second reading sometime in mid-March. If the bill passed, Coon said it would take about 12 months to get it up and running. – “It sets up an advisory committee to work with the various ministers who would be involved,” he said. – “And really that’s all it would take to get to the point where targets could be set for the province and for targets for our public institutions like schools and hospitals.” – Coon said he’s received a lot of positive feedback on the bill from agriculture organizations as well as individual MLAs. – He said he’s hopeful the bill will pass and said he is open to making amendments. – “I’m always open to amendments to make bills better so we get the best possible law in the books,” he said. – “But I don’t see any reason why it wouldn’t pass. I think both parties would have to explain why they wouldn’t support it if it didn’t pass.” – A government spokesperson said Coon’s bill is being studied. – “The government has committed to developing a local food and beverages strategy to assist local growers and produces develop their products and get them to market,” the spokesperson said. –  The National Farmers Union in New Brunswick said in a statement on Thursday that they would like to see Coon’s bill passed. – “Food is one thing that all New Brunswickers require on a daily basis and food security is an issue that affects and unites all people,” the group said in a statement. –   }

{ We’re taking it slow for now, after being ‘down for the count’ / ‘under the weather’ / being beaten up by flu bugs for the last several weeks. Who knows? We might wake up tomorrow full of vim and vinegar and want to dive right back into what we were doing up to near the end of last month. But right now, I don’t even want to think about a lot of the nonsense that is passing for ‘News’ lately.  — Quote Paul Simon? “I get all the news I need from the weather report.” (?) But anyway, we could probably supply you with a barrage of retweeted stuff: Yay? Note to the world: “Hang in there-”  —djo— }

{ There were quite a few demonstrations in Montreal and maybe elsewhere, people disrupted traffic with signs I’ll translate to “you can stick your austerity measures where we hope it hurts you a lot.” And the feeling is ‘we’re not going to take this [ bull chips ] any more. But now it’s after 9 pm and we’ve been at this at least twice as long as we wanted to be- Time for somebody else to jump in and save their little corner of this world. okay?  —jim w— }

{ & Doug has added a catch all blog to our madness here, and we will probably be posting our daily stuff there too, at http://www.aerendel.org/CanadianNews/ It’s on one of our servers and he managed to put in a twitter feed and connected his sadly neglected effbook account so anyone friending the right Doug Otterson on facebook should get lots of interesting retweets etc. Busman’s Holidays are Us?  —jim w— }

I was born with this irritating need to know what life is all about. I've tested as having an Indigo Aura / might be an Indigo Child. (Trouble Maker?) (Why bother? Trouble knows where to find me... He stops by for coffee regularly-) My First Nation / Native American friends say I have an Owl teaching me to see through lies. They tell me that dishonest people are afraid of me, because they know I can see through their b.s.

Authors ( Copied from The ArnpriorNews)