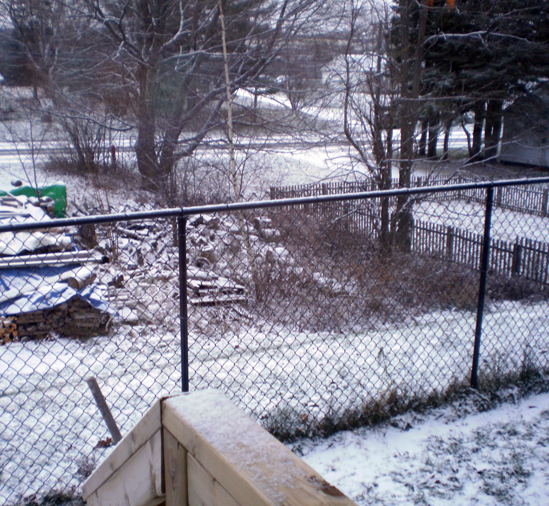 This is the view from what Cathi calls our back door. It looks more like a front porch entry from outside, except for the complete lack of sidewalk. One of the first things Cathi had done after we moved in was have a fence put up to give Jassper a nice area to run around in without needing to be chained up all the time. This was taken a little after 8 am on 20 November, 2014. 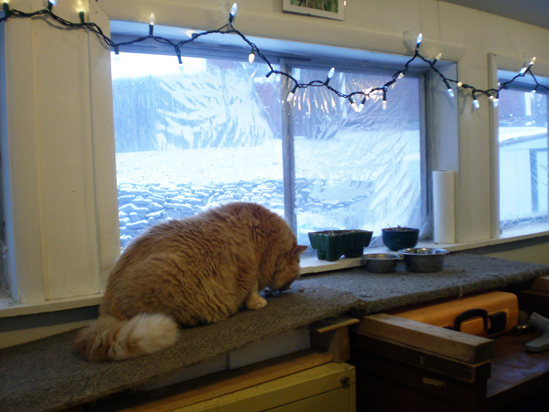 Moe, the Orange ‘Cat and a Half’ – enjoying a morning treat with this morning’s snow in the background.

Just before I woke up I dreamed I was telling somebody there was something wrong with my shoulder. I woke up and my right arm was numb. I moved and my shoulder snapped into place. I thought that was a bit strange, but it worked. Whether this is some mild flu or a left over from a slightly stronger one that plagued us both last week, I have been waking up with stinging muscles and while I haven’t been feeling really bad, I haven’t quite been my normal self either.

Yesterday, worrying about the grey ‘visitor’ cat, it took me more than twice as long as usual to get anything accomplished- but went over 90,000 words in My NaNo Novel. There are a couple things I think I want to pull out before I have it officially registered as a winner. At least two scenes I believe are so special I don’t want them out there, released where anybody can steal them from me. This is the first time I’ve felt like that about anything I’ve written, and I’ve been writing for quite a while. -Just, maybe, haven’t felt like I’ve been this close to having a commercial success in my ‘hot little hands’.