— Yeah. so Jetpack plus WordPress probably didn’t do this on purpose, but as soon as I activated Jetpack on this blog, the photos disappeared and when I deactivated Jetpack they magically reappeared.

——What this means, is — routines that are supposed to give Self-Hosted WordPress Bloggers access to stats that are available to wordpress bloggers whose blogs are hosted on wordpress servers… seem to have ‘interesting’ side effects. However — If a few dubious bells and whistles inadvertently reduce any photos in a post to a link, well, sorry- I don’t need to know that five people read my rantings last Wednesday if my mother can’t go “ooh” and “ahhh!” over photos of strange and/or beautiful natural occurrences (like a herd of slightly jumpy and very hungry deer munching on oats less than ten yards/meters from our back porch window – or a twenty five pound (large economy sized) orange furball of a cat ( a.k.a. “Moe” ) glaring at the camera as it flashes and gives him bright inverted pyramids of golden light in his grumpy eyes.)

— Of course, my blogging woes could also have been Moe, the orange cat’s doing… Ya know ((“Orange Cats are Trouble!”))? Orange cats are almost certainly from another world— and I wouldn’t doubt it one bit if somebody told me they believe this guy has telekinetic powers. (He can be in several parts of the house, looking like he’s been there all day, I mean, everywhere you go, there’s Moe, lounging on the floor, or the couch, or a bed, or a window sill- yawning.) (So it wouldn’t be too much of a stretch to believe that this cat can blink a portal into existence, step through it, put on a headset, call his home planet and tell them to wait a couple days before launching the all out invasion force, there aren’t enough mice for all you guys to play with this week, um, I ate too many last week, see? I’m wider than I am tall? Yup, that’s me all over…)

Yeah, so Moe blinks and the computers all go haywire. We should send him to parliament? or maybe the NSA, magic cat walks around and all their spy data believes it’s in danger of falling into alien hands and erases itself, shuts down the spy routines and forgets its passwords. And the NSA is too proud to ask the CIA or the KGB what their passwords are, so they create new ones, and then the cat jumps on their shoulders with his claws extended so he doesn’t go flying off into a mess of papers and the passwords get scrambled, nobody can read them and the security subroutines see that top level people are complaining they can’t remember those passwords five or six times within the course of an hour (Earth Time) and shut the whole system down. And it will stay down until they can find a five year old genius who might be the only person on twelve continents who knows how to retrieve that stuff…

Somebody get a hold of Starfire Tor and find out what the bleep is going on with wirdpress / me photos?

Gaaaaaaa!   { Post Script: Whatever the problem was, it went away — Magically? }

Zealander – Protector of Orphans and Watcher in the Night –

We’ve beeh having major problems with this blog. Uploaded photos etc. are showing up only as links.

Does Dhoreena show up below this?

This is probably Dhooreena. Does she show up here? Can you see her? 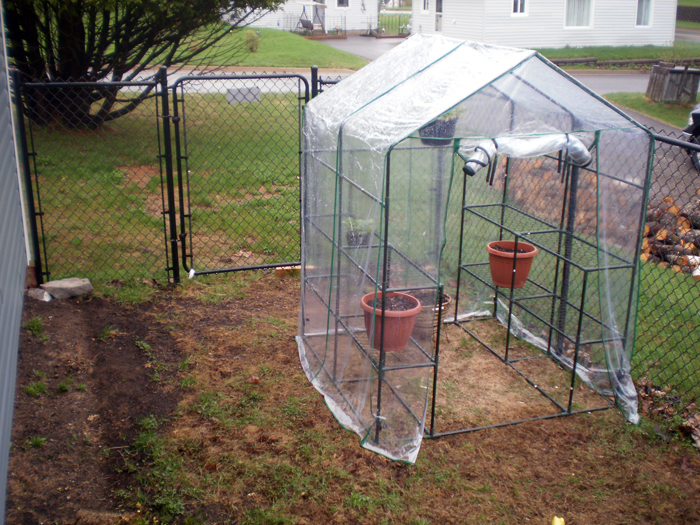 Cathi’s Greenhouse- We put it together yesterday (May 17, 2014) and two or three photos I took disappeared into a black hole of schnarr.

Cathi’s Greenhouse- We put it together yesterday (May 17, 2014) and two or three photos I took disappeared into a black hole of schnarr.
I think we had a quick little electrical glitch yesterday. While I was trying to download photos from my SD card. quite a few photos became really messed up and ‘unreadable’. And I got the error message that I had removed a USB device improperly and might have issues with scrambled memory or something like that. 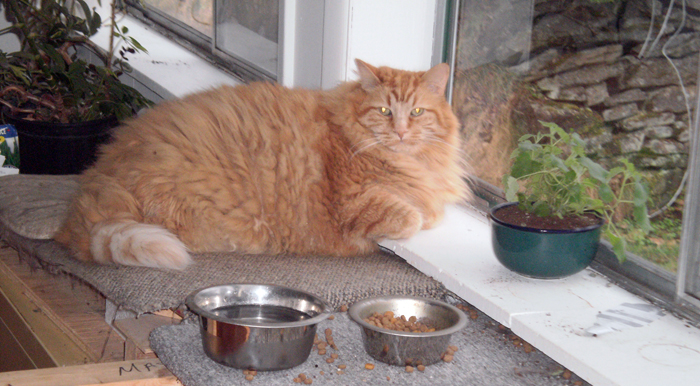 Moe. A couple photos of this guy were lost, but had already been saved in several places. Here he is, staring golden triangles into the camera.

Moe. A couple photos of this guy were lost, but had already been saved in several places. Here he is, staring golden triangles into the camera.
So I spent several hours last night backing up what was left on the SD card onto several computers and several Hard drives connected to those computers. 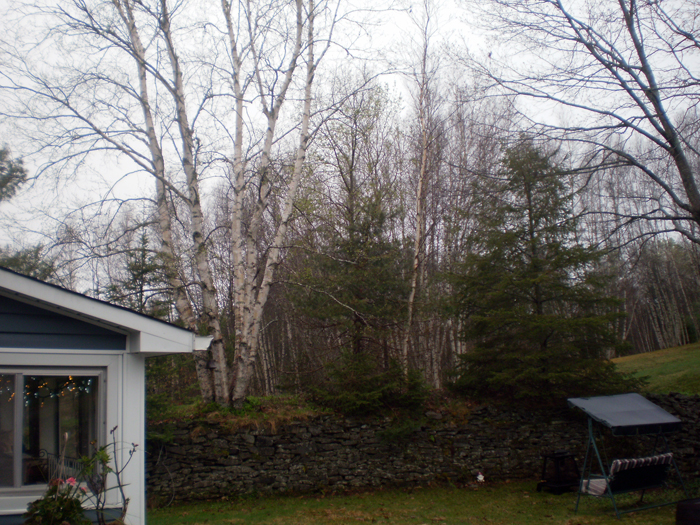 Trees on the hill (without deer this time) in the rain, buds of leaves hinting at their existence.

Trees on the hill (without deer this time) in the rain, buds of leaves hinting at their existence.
I had to restart a couple of those computers a couple times because internal or external hard drives had vanished (and/or the firewire chain had fatal problems). 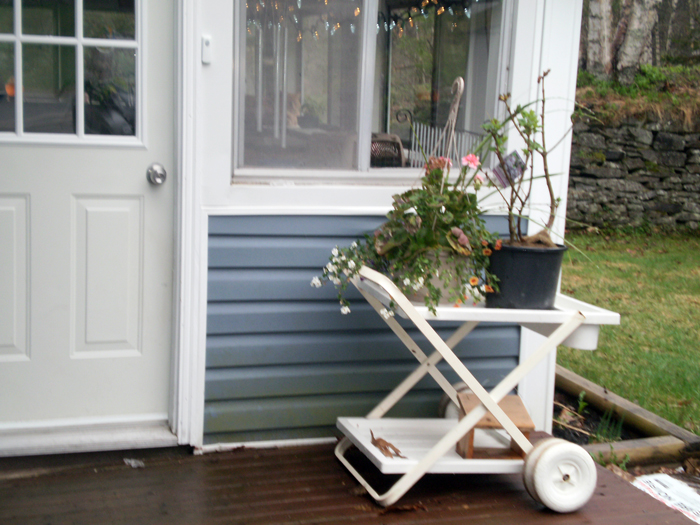 This is a garden cart, which i picked up at the ‘Habitat for Humanity’ ‘ReStore’ that our GPS tried to tell us was at an address that couldn’t possibly exist.

Today, we managed to pry ourselves out of bed and zoomed off to the Kent hardware & lumber store to pick up a few things including seeds for Cathi’s Garden, bits of lumber to fashion a more functional place to stash firewood for next winter. & Yummy pie at Frank’s Fifties Style Diner. 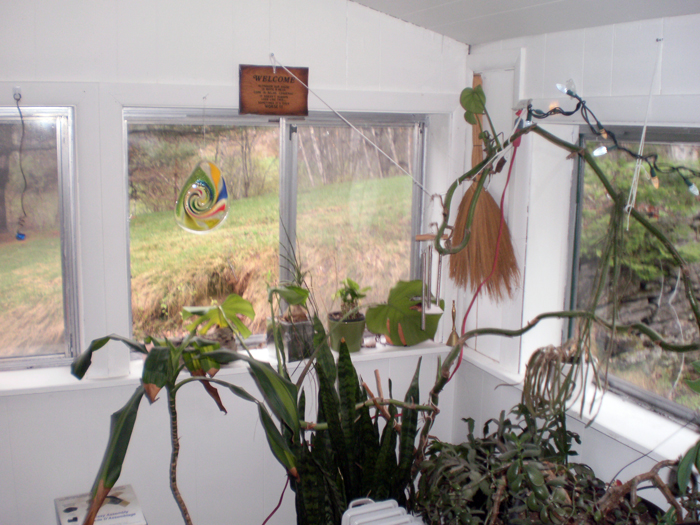 Cathi’s ‘Zen’ Corner (just the interior, not the view from within) on the porch which she believes is just perfect for sitting and enjoying four legged and winged friends while laying her guitar and drinking in the beauty around us.

Cathi’s ‘Zen’ Corner (just the interior, not the view from within) on the porch which she believes is just perfect for sitting and enjoying four legged and winged friends while laying her guitar and drinking in the beauty around us.
And finally, we’re back home dealing with wild and crazy (but always interesting) pets, waiting for the next episode of Game of Thrones… Thinking about a run to Tim Hortons in a couple minutes…

Welcome to WordPress. This is your first post. Edit or delete it, then start writing!