— Jim W, who is braver than I am, went out and shoveled a little bit already, says it might have been called ‘heavy wet snow’, but it isn’t that heavy. He measured it and says his driveway isn’t quite covered in a nice, uniform depth but most of it is 12 inches deep, with scooped out- partially wind cleared areas down at 6 or seven inches and he’s guessing the average is up around 9-12 inches, or 22-30 cm.

I hurt just thinking about it.

Let’s see whether this works or not: 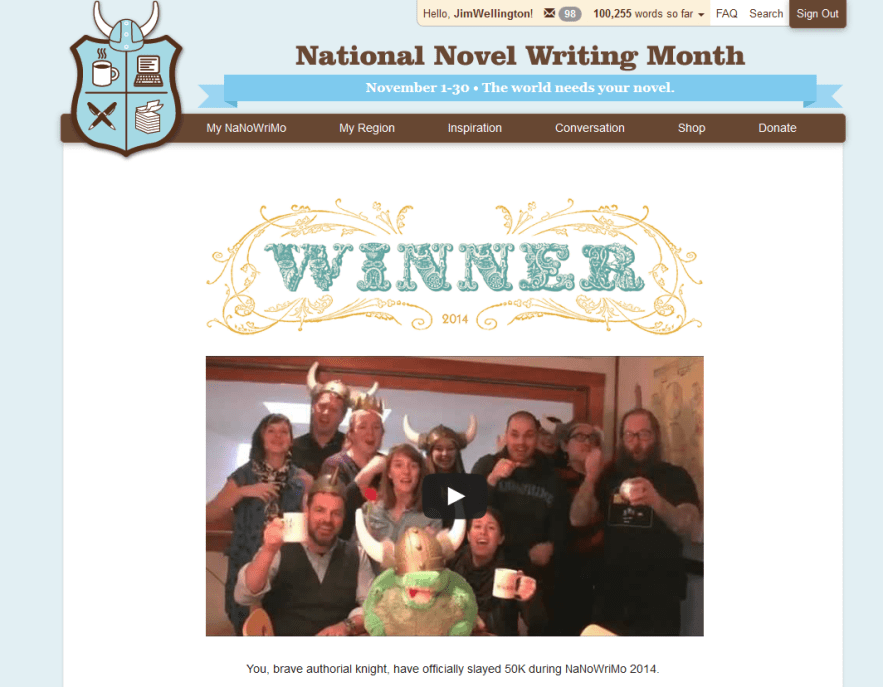 I may have gone blind and just don’t know it yet, but it’s official – Looky here- Yay – —jim w—

—Still have a lotta work ahead of me on this one.

Jim has changed his ‘working title’ on this one a couple times, but it is set in 1963 – and, he says, a lot of things ‘hit the fan’ for several of the story line’s characters around the time of the Kennedy assassination.

One silly note: He told me he uploaded 101,174 words into their verification app. And the app only counted 100,255 words, as it says at the top of the slightly shrunken screen shot he posted at some ridiculous hour of the early early morning.  🙂 Oh – His Spouse explained that the app does not count double words and other technicalities, so if anybody NaNoWriMo-ing away has a lot of sentences “-that, that-”  or similar grammatically okay things, make sure you go over the 50,000 word threshold before you copy and paste your novel into the app’s box.

—Looking forward to reading that–,

Jassper blocking the way into the living room, piano on the left, fire behind the puppy-horse. Note, I didn’t correct the flashburn in his eyes. He does not have Orphan-Annie eyes.

I’m listening to “Sixty Years On” by Elton John, from his first album? Reliving a lot of the turmoil from the late sixties, early seventies.

My NaNo Novel has gone over 98, 000 words, is dealing with the early sixties and pouring salt in old wounds.

Somebody once told me that he’d heard that the measure of a writer is what he or she does when there is “Nothing to write”.

Sometimes I think I will never know what that feels like. I have so much to finish writing. Other times I think about writing and my head fills with pins and needles and I can’t imagine sitting down to start.

Yeah, it gets weird. But

Moe, aka le bete orange, happily enjoying the torn bit of packing paper, which, he is sure – I put there just for him.

The orange cat scattered packing papers all around the living room again. When I tore one in half to roll it up and use it as the kindling and put the second half on the couch, Moe, the orange cat, jumped up on the couch, smiled at me for being so thoughtful and perched himself on that piece of paper. Yup things are back to normal around here. —WordPress’s special characters don’t like being placed in a ‘caption’.— & I’m not sure whether all beasts in French are supposed to be feminine or not. — But Moe’s a neutered male so he probably doesn’t care. And human languages are all inferior to meows in cat’s minds anyway — so would he be ‘Monsieur, la bête orange’?  —

The grey visiting cat jumped down from the table this afternoon and did not go down on his face, and hurried and jumped up onto the cat perch on the porch without favoring his wounded shoulder.

Oh, the fire – for which I didn’t need Moe’s little bit of heaven to fuel it’s beginnings.