— Somebody just re-tweeted a nearly whited out photo: – See Below, I hope –  “Malek Jandali @MalekJandali” – “My name is Katya: I am one of 17,000+ #Syria children killed by brutal #dictator #Assad war crimes against #humanity” — They picked a photo of somebody who could live next door to anybody – Looks like somebody is escalating the propaganda campaign to psyche you into ‘wanting’ their next war. 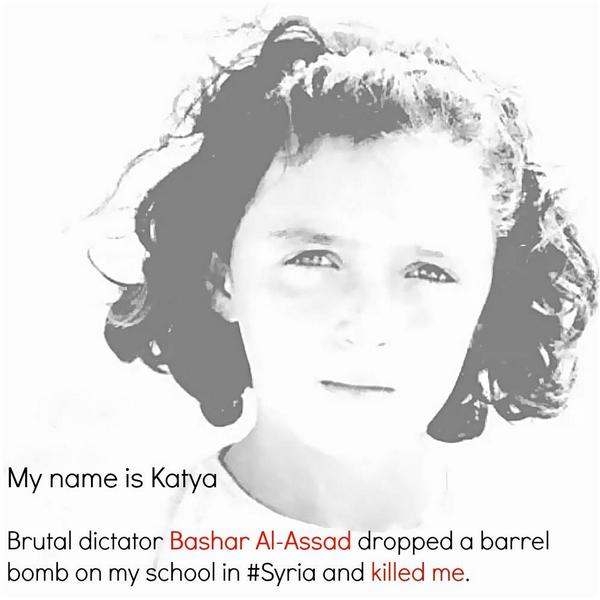 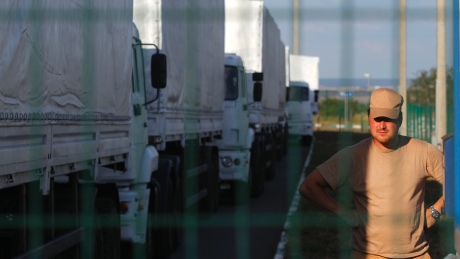 & the story below popped up when I hit ‘refresh’:

Spider-Woman’s butt sparks conversation about sexism in comics   { Oh, you think men and women with impossibly sexy physiques wearing ridiculous costumes might have something to do with sexism? I think I remember young women reading ‘Archie’ comics while most boys were ‘reading’ superman and batman and I got hooked on Spiderman, X-men and the Fantastic 4. Marvel in those days was more about angst and cute tricks -a bank manager named “Ben Dover”?- but, yeah, women in comic books looked like women in television commercials might if college nerds could have digitally ‘enhanced’ them and altered their clothing. }

‘Facebook drug task force’ hoax dupes thousands of stoners   { 100,000 people send messages on facebook to warn others about a rumored campaign to intercept messages with keywords that might indicate that somebody was setting up a drug sale on-line and get those messages to local police. }

Workers not to blame for Quebec pension problem: Don Pittis   {  }

Montague homicide victims, suspect not acquainted, say RCMP   { The victims were a father and his adult son. A suspect is charged with two counts of first degree murder. I’m not as confused about this one as some others, but, if the accused didn’t know the victims, how is that ‘pre-meditated’? Did he plot to kill people who drove the wrong colour of the wrong model car? Or something equally irritating to the alleged killer? }

Video of Rockliffe prowling person of interest released by police   { On Twitter – Somebody retweeted this photo with the caption “It’s Pierre Poutine”  – a reference to the guy recently convicted in the Conservative robocall scandal – I thought the photo was too blurry to be certain. }

Cliché alert: Grits ‘rolling up their sleeves’ for Canada   { ‘Grits’ is the nickname for the Liberal Party. This seems to me to be another headline written by somebody who doesn’t like Justin Trudeau or has an anti-Liberal bias. – unlike me- I have an anti-politician bias. The party in power has the biggest virtual target painted on their foreheads at the moment.  }

James Foley killing: Why ISIS beheaded the U.S. journalist   { In the article, a reported ex-C.I.A. analyst says ISIS believes the publicity will help their cause and attract many more supporters. The article also says there are amputations taking place and people being crucified in ISIS held territory. There is a mention of a ransom under a photo at the top of the article and the only ransom-like detail I read was -If the U.S. stops the airstrikes in Iraq, we’ll stop beheading U.S. journalists.- sounds like a win-win situation for both sides. ISIS gets to brag that they’re powerful enough to either kill U.S. citizens or blackmail the U.S. into stopping the bombing and the C.I.A. has a really nasty looking ‘enemy’ to protect U.S. citizens from- and has the opportunity to get rid of a couple pesky investigative journalists in the process. }

-Analysis- Canadian pension tension: Don’t blame the workers writes Don Pittis   { The link in the ‘Most Viewed’ hinted that it was Quebec’s problem and that headline didn’t have as creative liguistics. }

Fewer jobs for students in federal public service, think-tank says   { Okay, they won’t hire anybody so that ensures that they can point their fingers at the federal agencies and accuse them of not doing their jobs properly when major catastrophes take place, but if, for instance, Transport Canada wants to hire more and better qualified inspectors in order to properly do their job and they are told, ‘Hiring more people or more expensive people is not in the budget.’ – Who do you suppose should get the blame next time? }

Hiker in B.C. rescued days after fleeing bear in tree   { You have to sit through commercials before and after you get to see the real video. A twenty five year old hiker climbed a tree to escape a bear. The bear did not immediately leave. The hiker fell asleep and fell out of the tree, suffered a severe concussion and a back injury, and may have been in and out of consciousness for as many as 4 days while people were searching for him. A man walking his dog found the injured hiker, face down, on the ground and said the injured hiker was ‘aware, but not lucid,’ then added, ‘he was quite groggy’. An expert on bears says you should freeze and talk in a nice calm voice, climbing a tree is not a very good idea. If you speak nice and calm and friendly, bear will ‘probably’ become bored with you and walk away. }

‘Everything is on fire’: Lac-Mégantic train engineer’s calls from night of disaster released   {  }

Are wearable camera companies going to cash in after Ferguson?   { Probably not- if the people who are plotting to destroy the buying power of your currency have their way. The U.S. economy is scheduled to crash this autumn. People will starve to death and those who depend on electricity for home medical devices will be terminally out of luck. Link >>—-> Half Past Human Tweet >>—-> @clif_high  }

Fracking wastewater clean enough for Dieppe sewer, says company   { A Nova Scotia based company that wants to ship as much as 30 million litres of fracking wastewater to New Brunswick says the water is clean. ***But the process is not safe. It doesn’t matter how clean the water is that you want to use for fracking, the process of fracking destroys the purity of ground water and can lead to flammable gas coming into your home through your pipes with what you thought was clean, drinkable water. Haven’t you seen the video of flames shooting out of faucets in people’s kitchen sinks? Don’t let yourself be duped. & If you’re  determined to commit suicide and want to be fracked to death, please move a million miles away from any neighbors, and frack yourself. } 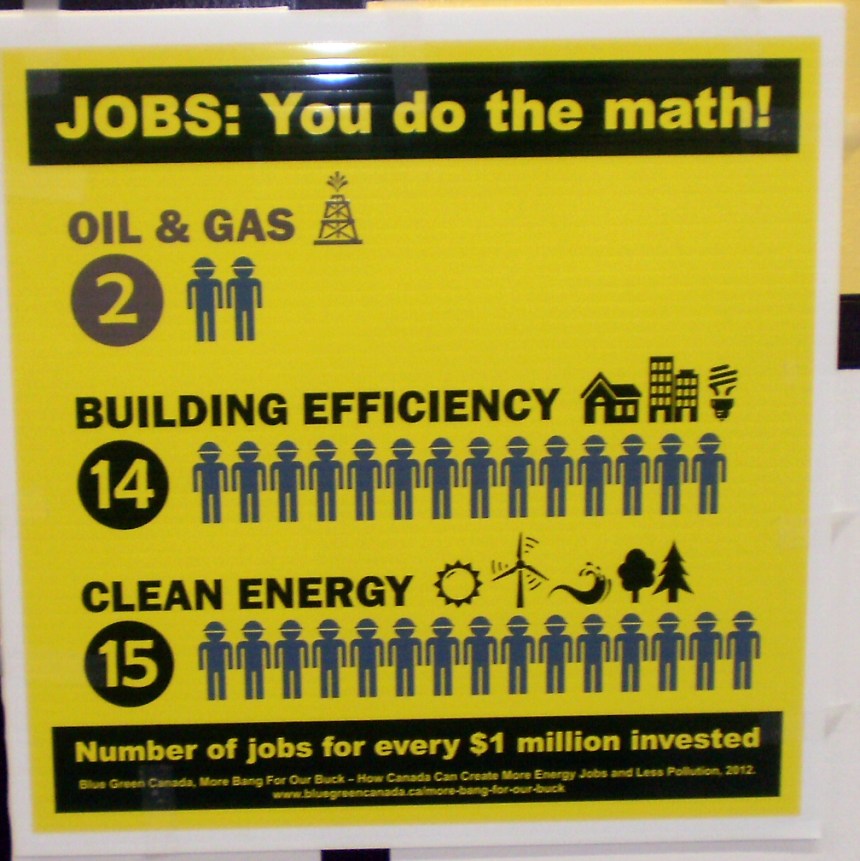 Photo of Poster = # of jobs per Million $ invested – Jim W took this photo in a hurry when he saw the poster.

Many voters say jobs and economy are top priority   { Party hacks for the sitting government might want you to believe that jobs and the economy are your most important issue, but this article starts out naming voters with other top priorities, a man in Moncton says health care is most important and believes a system modeled after a combination of the English and French medical systems should be implemented here. One woman from Beresford believes the environment is most her most important concern, ‘If the environment goes, we’re not here anymore.’ Another woman says government accountability is her most important issue and she would like to see more transparency. I saw photos of a Poster, “Jobs per million $ invested / You do the math”  *** Jim W sent me the poster photo. (above) }

4 parties launch election campaigns   { The ‘Progressive Conservatives‘ -*does anybody else seem to realize that ‘-looking or moving forward – while -looking or moving backward’ doesn’t make sense as a name for a political party that stands for anything but the status quo?- The PC party is ‘banking’ on voters being stupid enough to vote to hand their government over to those who want to Frack them to death. The Liberals -who currently enjoy a big lead in the polls we’ve seen- say they would support an oil exporting facility, the Energy East Pipeline, and Sisson Brook and other mining opportunities. The NDP -New Democratic Party- say that neither the PC nor Liberal Party can give ‘New Bunswickers’ the government they deserve because both front running parties are indebted to special interests -Big Business- The NDP wants to ‘create the best education system’ to help N.B.-ers get high paying jobs, and also wants to ‘fix the health care system’, ‘lift rural communities out of poverty’, ‘give an equal voice to all communities’ and ‘eliminate patronage from government’. The Green Party has criticized the Premier for saying he would not meet the Green Party Candidate in CBC televized debates, and said the party will release their platform on September 3rd. There is a mention of a fifth party down at the bottom of this article. The People’s Alliance, but no mention of the party’s ideals or philosophy was included here. On the People’s Alliance web site there are 4 press releases talking about their ideas that changing Motor Vehicle registration and cutting the requirement for vehicles to have front license plates will save taxpayers money. Their policies page is blank. }